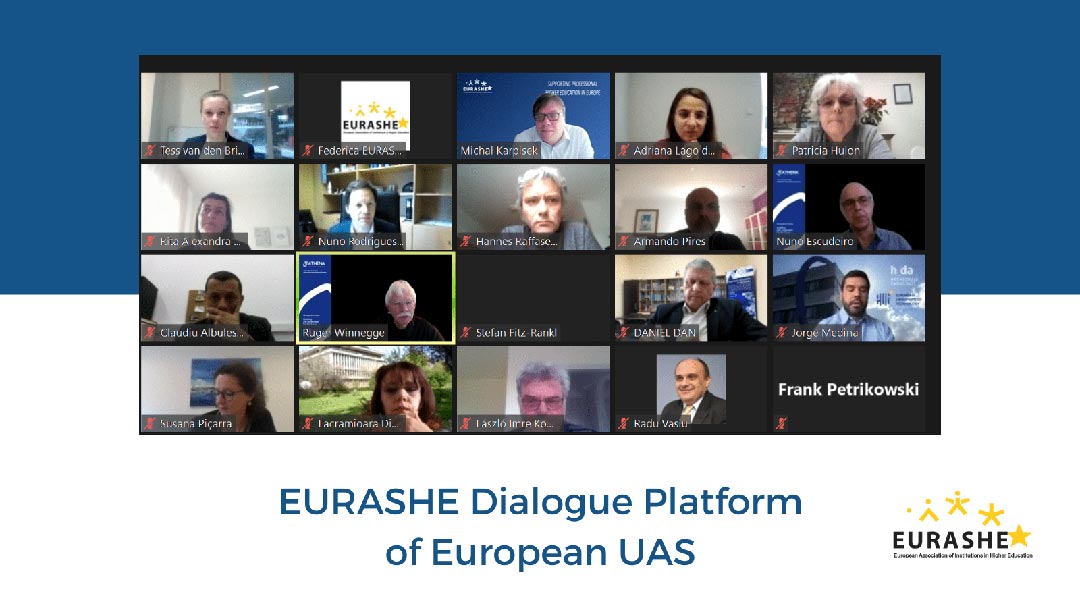 On 17 March 2020, EURASHE hosted the first meeting of its Dialogue Platform of European Universities of Applied Sciences (UAS). The platform was set up to further support professional higher education – hereafter PHE – institutions within the pilot European Universities alliances and to facilitate the exchange of experiences and views on specific PHE-related issues.

The meeting was attended by 27 participants and included representatives from the ATHENA, E3UDRES2, EELISA, Eut, RUN-EU and ULYSSEUS alliances. EURASHE Secretary General Michal Karpíšek opened and hosted the meeting.

The most ambitious goals for the coming period: an actual need for more funding and long-term strategies

It was discussed that the European Commission has very ambitious goals for the initiative, but that these are not on par with the current funding and evaluation processes. Representatives pointed out the need for more funding, in order to support alliances formulating their long-term strategies.

Personal perspectives were shared on the relationship between higher education institutions – hereafter HEIs – and the world of work. Currently, the EUI is still relatively unknown outside of the European Higher Education Area. An increase in communication between HEIs and the world of work would also allow the development of education curricula that better facilitate the needs of the labour market.

Discussions during the breakout sessions highlighted how all the participating alliances recognise the need for long-term strategies, and have great plans and ambitions on how to serve their regions and societies. There is a big commitment to strengthening the engagement with regional partners, but this needs a solid, long-term basis first.

A number of policy-related issues including the legal position of the alliances, funding and quality assurance in the European context should be addressed in the coming period. Currently, funding is strongly project-oriented and the funding differences on the national level influences the collaboration on the European level.

Ultimately, most of the alliances envisage strong integration and the development of multi-campus, multi-national institutions involving in their life and governance a variety of local partners and actors.