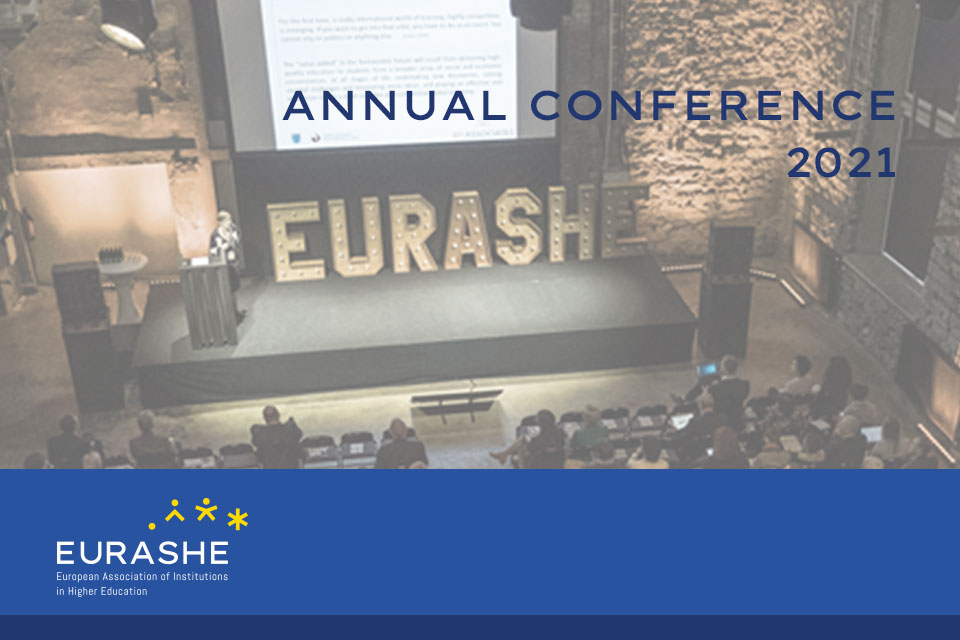 EURASHE had organised its 30th Annual Conference as a fully only event together with its members the Portuguese Polytechnics Coordinating Council (CCISP) , the Polytechnic Institute of Porto and with the support of the Portuguese Presidency of the Council of the European Union.

Universities of applied sciences’ leaders, the entire community of professional higher education, European businesses and public institutions and European students’ representatives were invited to attend the Annual Conference to share their experience and learn about trends, models and inspiring practices.

The concept of sustainable development, which is fundamental for the European Union, is based on a sizeable holistic approach to a whole range of interlinked global challenges. The Union, represented by the European Commission, has been instrumental in preparing Agenda 2030 for Sustainable Development, adopted by United Nations in 2015. In 2017 Member States reached the new European Consensus on Development, “Our world, our future, our dignity” which set up the EU response to Agenda 2030. The suitable development will also be in the heart of the political agenda for the next European Commission (2019-2024).

Following are the keynote speakers of the event:

Ms Anita Lehikoinen was appointed Permanent Secretary of Ministry of Education and Culture on 1 May 2013. LinkedIN

Sandrine Dixson-Declève is currently the Co-President of the Club of Rome. Linkedin

Elisa Ferreira is the European Commissioner for Cohesion and Reforms. Learn more

Mariya Gabriel is the European Commissioner for Innovation, Research, Culture, Education and Youth. Learn more   Following are the speakers of the panel discussions:

Ana Tecilazić is the Secretary General of the Algebra University College. LinkedIN

Jiří Nantl is Deputy Governor of the South Moravia Region in the Czech Republic. LinkedIN

Denise Amyot is the President and CEO of Colleges and Institutes Canada (formerly ACCC). LinkedIN

Dimitri Corpakis, is an independent expert, writing and talking on innovation, growth and technological change. An engineer and planner by training, LinkedIN

Ulf-Daniel Ehlers is the Vice-President of the Baden-Württemberg Cooperative State University (DHBW) in Stuttgart (Germany) and responsible for Quality and Academic Affairs in the Board of the university. LinkedIN

Laura Eigbrecht has been a researcher at the Baden-Württemberg Cooperative State University at the Chair of Education Management and Lifelong Learning since 2019. LinkedIN

Ülle has been the Rector of Tallinn Health Care College in Estonia since 2006. LinkedIN

Luis Miguel Pinho is Pro-President of the Polytechnic of Porto (P.PORTO) for the areas of Research and Innovation. LinkedIN

Birgitte is the project manager for courses on the 17 SDG for lecturers at VIA University College in Denmark. LinkedIN

Gabriele Permoser has a master degree in political sciences from the University of Vienna. LinkedIN

Since 2016, Ulla is the Rector of Tartu Health Care College in Estonia. LinkedIN

Vahram holds a PhD in Technical Science and is an Associate professor at the chair of Information Technologies and Applied Mathematics.

Tine Ternest is head of internationalisation at VIVES University of Applied Sciences since 2016. LinkedIN

Richard Tuffs was director of the ERRIN network (www.errin.eu) from October 2010 to August 2017. LinkedIN

Lies Verstraete graduated as a geographer from the University of Ghent, after which she started an additional study in Conflict and Development. LinkedIN

Richard is a graduate of Trinity College Dublin (he holds Bachelor and Doctorate degrees in science) and the Institute of Public Administration (MA in Public Management). LinkedIN

Find below the EURASHE Annual Conference Programme Committee members. The primary role of this committee is mainly to select the relevant contributions for the sessions, give feedback on the programme, and support the Conference by facilitating some sessions (if needed).

Thomas Berger has been head of the EU liaison office of the University of Applied Sciences (UAS) Fulda since 2016. LinkedIN

Find the conference partners below:

← NEXT GEN PHE | EURASHE 31ST ANNUAL CONFERENCE
We use cookies on our website to give you the most relevant experience by remembering your preferences and repeat visits. By clicking “Accept All”, you consent to the use of ALL the cookies. However, you may visit "Cookie Settings" to provide a controlled consent.
Cookie SettingsAccept All
Manage consent

This website uses cookies to improve your experience while you navigate through the website. Out of these, the cookies that are categorized as necessary are stored on your browser as they are essential for the working of basic functionalities of the website. We also use third-party cookies that help us analyze and understand how you use this website. These cookies will be stored in your browser only with your consent. You also have the option to opt-out of these cookies. But opting out of some of these cookies may affect your browsing experience.
Necessary Siempre activado
Necessary cookies are absolutely essential for the website to function properly. These cookies ensure basic functionalities and security features of the website, anonymously.
Functional
Functional cookies help to perform certain functionalities like sharing the content of the website on social media platforms, collect feedbacks, and other third-party features.
Performance
Performance cookies are used to understand and analyze the key performance indexes of the website which helps in delivering a better user experience for the visitors.
Analytics
Analytical cookies are used to understand how visitors interact with the website. These cookies help provide information on metrics the number of visitors, bounce rate, traffic source, etc.
Advertisement
Advertisement cookies are used to provide visitors with relevant ads and marketing campaigns. These cookies track visitors across websites and collect information to provide customized ads.
Others
Other uncategorized cookies are those that are being analyzed and have not been classified into a category as yet.
GUARDAR Y ACEPTAR
Funciona con